Announcement by AMS Advocaten, The Netherlands

Last August, AMS lawyer Onno Hennis was in Myanmar where he gave lectures and training sessions to students and faculty staff of four different universities. He did this on the invitation of the American government.

In 2011, after some 50 years of political and economic isolation, Myanmar formally became a parliamentary democracy. Since then, the country has also been open to foreign investment. In recent years, Myanmar experienced significant political and societal challenges, with the situation of the Rohingya in Rakhine probably being the most pressing issue. 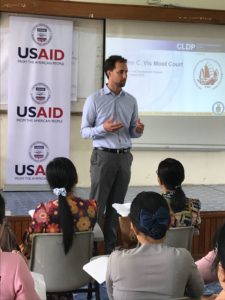 Initiatives are being developed both from the domestic politics and on the international stage to stimulate Myanmar’s economy. For example, since 2016, a working group led by Nobel Prize winner Aung San Suu Kyi has been working on legislation to improve the financial and legal climate in Myanmar. In 2017, a new law for domestic and foreign investment was introduced, and Myanmar has been party to the New York Convention since 2016.

The American government has been developing projects worldwide since 1989 as part of the Commercial Law Development Program (CLDP) with the objective to establish sustainable legal infrastructures in areas where this is lacking. CLDP has completed successful projects in (former) East Germany, Afghanistan, and Argentina.

The Vis Moot is an international moot court in the area of international trade law, which attracts more than 300 universities annually. AMS Advocaten has been supporting the participation of the University of Amsterdam in this moot court for many years.

Last week, on the invitation of CLDP, lawyer Onno Hennis lectured at four universities in Myanmar and worked with students in the context of the Vis Moot. Over the next eight months, the students will draw up statements of defence and prepare for the ‘oral hearings’ that will take place in Hong Kong in April 2019. The project aims to train a new generation of lawyers in Myanmar who have knowledge and experience of arbitration and (international) commercial law.

The support of this project is in line with AMS Advocaten’s strategy to offer its clients legal support even if this is (literally) cross-border. Last month, AMS Advocaten joined the League of Lawyers, an international partnership of law firms. AMS Advocaten also likes to use its knowledge and experience in pro bono projects both at home and abroad.